So I haven’t done much today in anticipation of needing a lot of energy for the stroke of midnight and beyond tonight, but I do have one last craft to share with you before kissing 2011 goodbye. 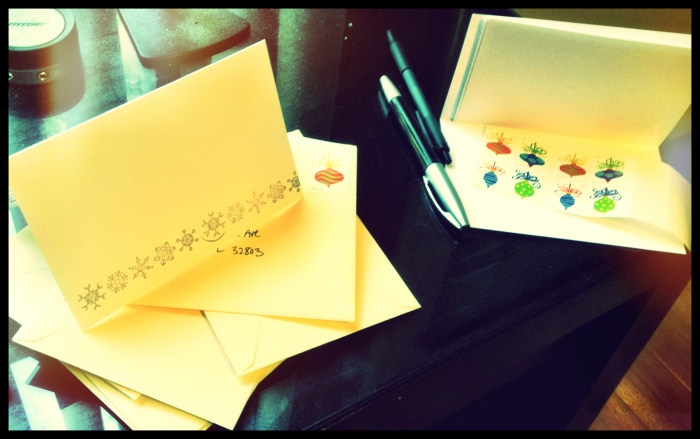 My Christmas/New Years/Thank You/REALLY, really late cards….  I swear they were written even before Christmas, but somewhere between 16 hour work shifts and friends in town and magnums of champagne, they got a little lost.  But they, like all of the other crafts I shared the other day, are made with card stock and envelopes left over from the wedding invitations.  Even that pen was the pen people signed our “guestbook/concert poster” with.  Yay for recycling!!

As my mom and I were going over all of the amazing Bylsma/Mathews events and milestones of 2011, she told me that she read an article where 80% of people polled said 2011 was a bad year.

2011 was pretty rockin.  I don’t know who those angry, sad people who they polled were, but they should have come to the Bylsma/Mathews wedding.  Or to my sister’s graduation.  Or just to one of Brad’s homemade dinners.  Like last nights’ duck.  That was enough to make my entire year if it wasn’t already awesome enough.  In fact, that duck might have changed my year to a 45 on a scale from 1 to 10.

And as we welcome in another new year, I don’t make resolutions like all of those people that are tweeting that they’re getting a head start at the gym. I am, however, looking forward to all of the fun and exciting things that I have planned for 2012:

I will be become Aunt Kelly to a new Baby Bylsma (Named Beyonce Boogie Bylsma, if Brad and I have anything to do with it.  Which we don’t.).

I will be singing again (!!) with a new voice teacher who I am really excited about. I may have to buy new plastic pants.

Brad will be back at Bar Pintxo and I will be eating a lot more tapas.  And neither one of us will have to use a car to get to work.  Amazing.

Two of our best friends will be getting married – to each other!!  Which means double dates for LIFE.

That’s all I’ve got so far, but I’m sure 365 days from now I will have so much more to write about and be excited and thankful for.  Thank you all so much for following along with me and The Key of Kels this year.  It has really humbled and amazed me how many people read and are interested in the thoughts that I’m putting out there in the universe.  I hope to always be so inspired by all of the amazing people and things I am so lucky to be surrounded by and I promise to keep sharing it all with you.

So tonight I will raise a glass to all of the incredible moments, memories, friends, ideas and places of 2011 and I will welcome in 2012 with open arms.  Bring on the adventures, 2012.  You have stiff competition in 2011, but we’re all ready for you!