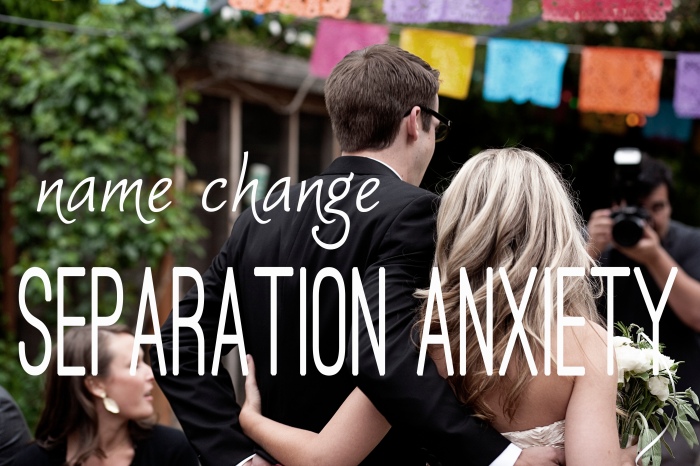 A couple of weeks ago, I headed over to CVS, took a passport photo, and mailed my old passport in.

I was officially becoming Kelly Mathews.

Ok, I am already officially Kelly Mathews.  But now, almost two years after getting married, I decided it was time to let go of that last valid piece of government issued identification that called me Kelly Bylsma.  I was getting my passport changed to my married name.

I handed the envelope over to the Post Office worker without hesitation.  In a few short weeks, I could jump on a plane to France on a whim.  If I happened to need to go to Australia, I absolutely could.  I could fly to Brazil if I wanted.  All with my new fancy passport.

(I cannot afford to do any of this)

I will say that about a year and a half ago, I wasn’t even remotely as excited about turning over that piece of identification.  While attempting to Keep It Real and focus on the things that are most important to me, I stumbled across a blog draft I’d started well over a year ago and decided to scrap for fear that I’d be insulting my husband or our relationship.

I see now that that is ridiculous.  I had an emotion that I’m sure many other women have just after they’ve gotten married.  I had just gotten married and was having all kinds of angry and sad emotions about changing my name.

I was having Name Change Separation Anxiety.

Looking back, it was almost like I was grieving.  At first, I felt like I was the only one in the marriage giving anything up.  All Brad had to do was show up, say his vows, put on a ring, and he was married! Nothing had changed other than his jewelry.

It was incredibly annoying.

I never once considered keeping my name when we were getting married.  I personally love the tradition that a family has one name to share with each other.  It was important to me that we were becoming a family, and the name just naturally came along with it.  But I have friends who have decided to keep their names.  I have friends who kept their name and added their husband’s last name to it.  I know there are many different ways nowadays to approach this, and I love that there are so many acceptable options now for couples to chose the option that fits them.

I chose to change mine completely.

But I didn’t expect to feel so lost once I lost my “Bylsma”.  And I partially blame Google for that.  Kelly Bylsma is so much easier to Google than Kelly Mathews!  Suddenly, I went from having this really unique name with a story and a guaranteed “can you spell that?” attached, to having one of the more common names in America.  I had spent years building up my identity and my music profiles online. I got used to having those sites coming up plain and simple when anyone went to look for me.  With Kelly Mathews, I had serious competition.

I also went through a time where I felt like I had abandoned my immediate family.  The Bylsmas are the most important people in the world to me and I am absolutely proud to be a part of that family.  Did dropping the name make it seem like I was trying to get away from that?  Did not even considering a hyphen or a joint last name make them feel like it wasn’t difficult for me to let go of Bylsma?  They still knew I loved them like crazy, right?  I was still as big of a part of that as ever, right?

The point is that I really struggled with my name change for a bit.  I was thinking about changing my name like I was abandoning my old self or becoming someone else.  I was struggling to define myself and my career, and now my whole identity was changing, too?!  I felt a giant loss of self and was grasping for ways to hold onto who I was while becoming half of this Mathews team.

I don’t know when I stopped feeling this way, but over the past two years I’ve come to realize how crazy that all was.  Yes, it sucks to have to build up your online presence all over again.  Yes, it’s weird to learn a new signature.  And yes, its absolutely annoying to make all of those appointments and to fill out all of that paperwork.

But when I look at the little family I am a part of, I am nothing but happy and in love.  And just because we chose Mathews over Bylsma-Mathews or Bylsmathews (maybe we should have chosen this one) or whatever other silly combination of names we could have chosen – a name is just a name.

I still have a wonderful Bylsma family who obviously doesn’t love me any less.  And in addition, I have an amazing Mathews family who have accepted me as one of their own.  That’s a pretty giant perk.

I have come to realize that Kelly Bylsma is still very much alive in me.  When I go out with old friends.  When I dance around my apartment to Beyonce.  When I cheer on my hometown team in the SuperBowl.  When I sing karaoke.

A name is just a word.  It’s just a label tying you to a group of people.  And my new name is tying me to a really wonderful man who I love very much being a family with.  So I didn’t mind shipping off that old passport with the picture of me from back in 2004.

Instead I’m thinking ahead to all of the adventures and all the stamps that will come with that new passport and with my new name.  And I’m planning a fantasy trip to wherever I will use this passport first.