When we first got married, Brad and I said that we would go on our “honeymoon” for our first anniversary.  We would go to Spain and take a week or two off just to travel the world and enjoy being married.

Well, we went to Jose Andres’ “The Bazaar”, which is all Spanish tapas food.  That kind of counted, right?

As our one year quickly approached and we came to the realization that there was no way we could head off on an extravagant vacation anytime soon (saving $$ for really big things!), we started playing around with other things we could do to celebrate.

Buy each other presents?

Have a dinner party with our California friends who didn’t come to the wedding?

Have a romantic dinner somewhere fancy?

And then we found out that our great friend Neil, who also officiated our wedding, would be in town with his girlfriend Julie.  We decided going out to a fancy restaurant was enough.  We wanted to spend as much time as possible with them while they were here.

We don’t get much East Coast friends and family time.  We get a lot of Brad and Kels time.  We’d been celebrating being married for the past 365 days.  And we’d keep celebrating long after our one year anniversary.

So, you saw the food collage from The Bazaar.  We ate a ton.  Dinner was absolutely amazing.

But Brad and I also started talking about something we’d brought up a few times over the past year. In our wedding, we mostly decorated with herbs.  We used herbs in the invitations, bouquets, corsages, centerpieces…

It was really lovely and it smelled wonderful.  And it was a theme that really fit who we are and what we love to do.

We decided that we wanted to get herb tattoos.

We found a great tattoo artist through a friend and brought him a sprig of thyme and a sprig of rosemary, tied together with the twine we used for our wedding.  Brad would get his on his arm, I wanted mine close to my heart, on my ribs.

A couple weeks later, we had an appointment on the books.

I needed a few martinis first.  I heard getting inked on the ribs were incredibly painful and I was a little nervous.

I went first.  They laid out this crazy looking bench thing that reminded me of the gynecologist for some reason.  I had a mini-freakout.

But once he started, I was absolutely fine.

Brad went next, chatting about pigs and food the whole time.

Now we both forever have a reminder of that incredible day – April 2, 2011 – when we promised to love and honor each other forever.

I tried to take a close up picture of mine now that it’s healed and looks awesome, but its in a really hard place to take a great picture of… 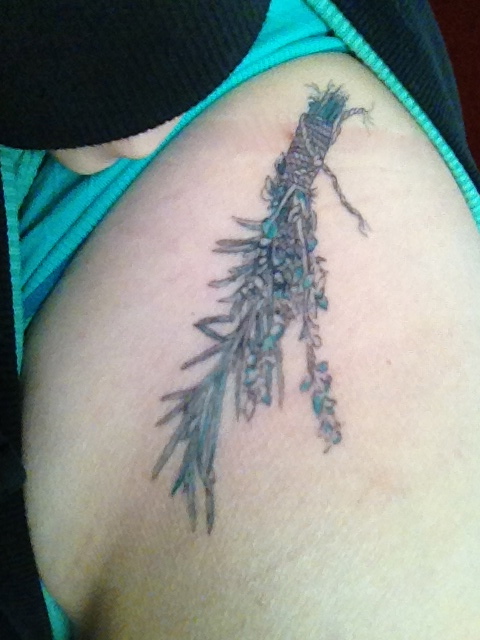 So instead I’ll show you a great close up I got of Brad’s when I woke up the other morning.

Lovely way to wake up every morning, right?

Every time it catches my eye I smile and think about that awesome man I married.