As I sat on my flight from JFK to LAX yesterday, there were a lot of things going through my head.

First of all, I was way excited that Steven Tyler was on my plane. Even though I never saw him, just knowing he was up there in first class was something.

Second, I was kinda pissed that they ran out of champagne. (Maybe Steven drank it all?). But when I ordered my second choice – a glass of Chardonnay – I got upgraded to a better kind and a much bigger bottle.  This may have been available to Mr. Tyler, but it was certainly not on my menu. 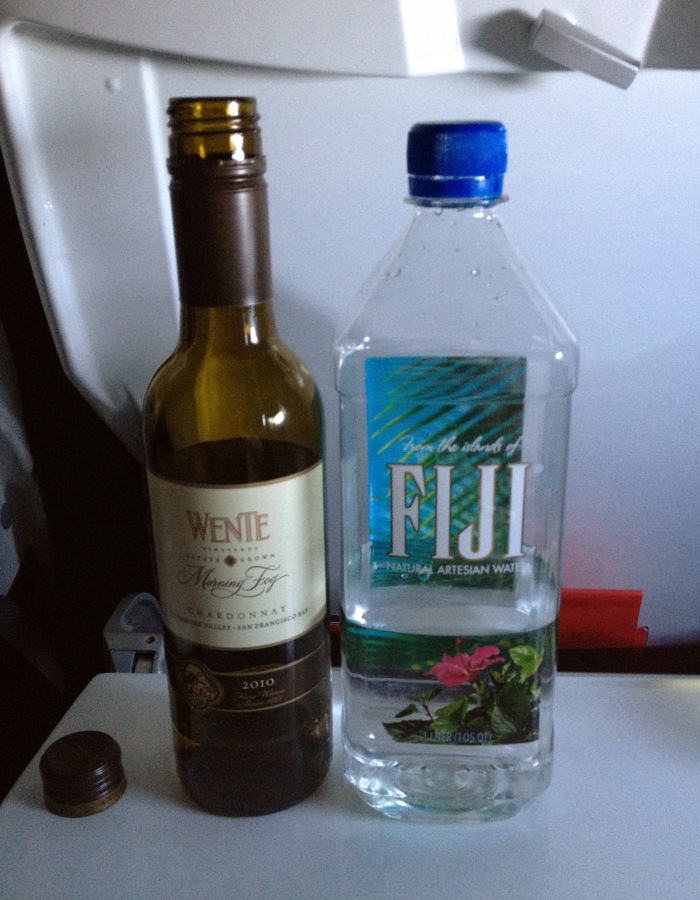 Thanks for the half bottle of Chardonnay, Virgin. You are officially my favorite airline.

But thirdly, I was feeling very introspective. I felt incredibly inspired in the city, as did Brad. Brad tells me that he found the inspiration to look at the big picture and to work harder than he has ever worked before to get to those ultimate goals that we always talk about. I am continually inspired by his work ethic and his passion for his career. He is truly amazing with the food that he creates and the ideas that he has. It’s hard keeping up sometimes.

I, however, was inspired by a scene I witnessed in a Manhattan H&M.

I should preface this by telling you that I habitually sing along to the radio. If I hear a song that catches my ear, I learn the chorus after the first time and sing along to it the second time it comes around. I listen to chord structures and make up harmonies to the parts where I don’t know the melodies or lyrics.

And I dance to any song that gets to me. I don’t see any problem with that. Wherever I happen to be. On a sidewalk, shopping for groceries, at – say – an H&M… The music gets to me.

In Santa Monica, sometimes that makes me appear crazy. Tourists from Japan stare at me. There are sideways glances from Europeans. Midwesterners move to the other side of the aisle.

I don’t really notice or mind.

But in Manhattan, Brad and I got off the D train to stop by his favorite coffee shop from home (gimme!).  Brad had needed a sweater to cut the chill that had come over the city in the last 12 hours, so we ducked into an H&M. We separated for a dangerous minute, but then I found him again, heading downstairs to the men’s section. There was a catchy tune about how “Imma make it rain” playing.

In that minute before I found Brad I was not looking at clothes, I was looking at my people. I was feeling the same energy surrounding me that I feel every time a good beat comes on. I was feeling the musicians and the dancers who needed a good outfit for a Saturday night out all uniting in a hip discount department store in Manhattan.

I was feeling a hundred people who had similar desires and ambitions surrounding me. And it felt damn good.

So I cut loose. I danced, I sang, I watched and I took mental notes. LA needs a bit of this. Actually, LA needs of lot of this.

And make it last a few more years until Brad and I can move to New York. Because my soul is there. It was so incredibly hard to leave.

Oh, and Brad got a great sweater, too.